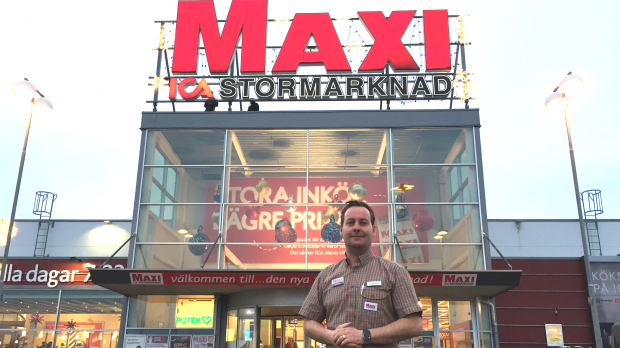 Photo: LZ Retailytics
Store Manager and Appointed Merchant Andreas Jendestig guided us through the Maxi Ica Stormarknad store in Kungsbacka, which is located in a retail park outside the city.

LZ Retailytics was invited to visit one of Swedish grocery leader Ica Gruppen’s hypermarkets. More specifically, we got an exclusive tour and interview with the Store Manager and Appointed Merchant Andreas Jendestig at Maxi Ica Stormarknad (hereafter referred to as Maxi) in Kungsbacka, in the southwest of Sweden. The store has a sales area of some 6,200 sq m and stocks around 21,000 SKUs. The total turnover is around SEK500mn (EUR51.9mn) of which groceries account for 91% and private label has a sales share of 21%. 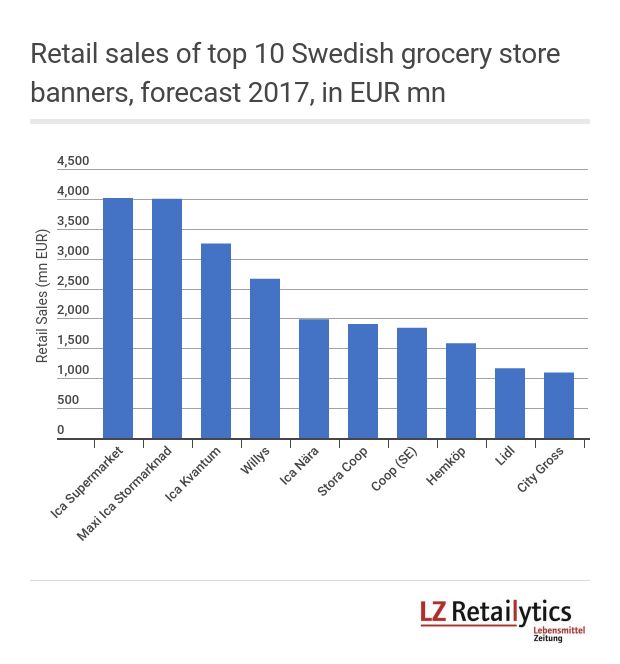 LZ Retailytics
According to LZ Retailytics data, Maxi Ica Stormarknad is Sweden’s second largest banner (number one with online sales included). As such, even if its independent merchants have plenty of autonomy, it gives a good idea of the context in which a large share of Swedish grocery store sales are generated.
Outside the store is a dedicated parking area where shoppers can collect their online grocery orders. According to Jendestig, following the addition of the online service, the store has acquired more loyal shoppers and the average spend per shopper generated from this group is much higher. 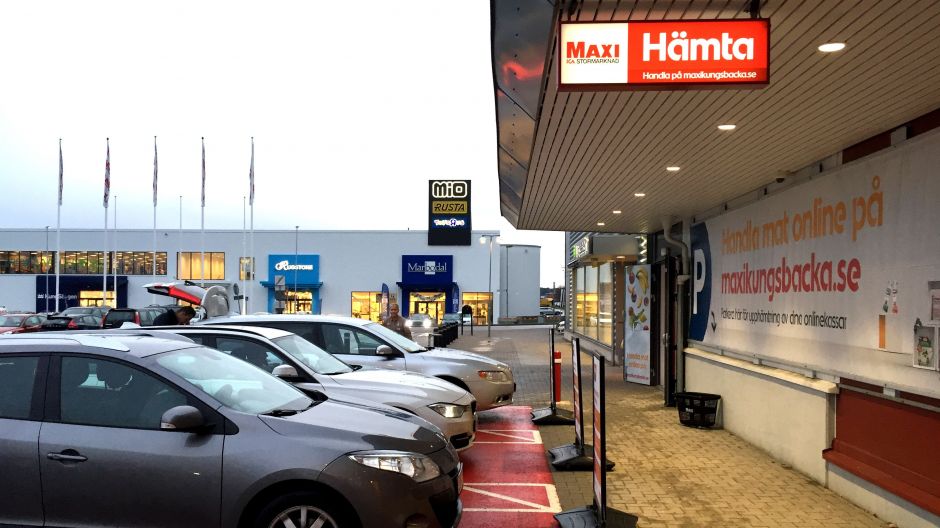 LZ Retailytics
Shoppers initiate the pick-up process when they have parked at the dedicated parking area by clicking on a link in an SMS which they receive on placing their order. The dedicated employees then receive an SMS, observe the car on a monitor and bring out the already picked grocery bags to the customer's car boot.
The pre-store area contains an Apotek Hjärtat pharmacy (a banner also owned by Ica), a café/pizzeria, a salad-bar and a kiosk/service desk selling a limited range of confectionery and tobacco items, as well as offering betting and postal services. It was a conscious decision not to sell more groceries in the pre-store area or to have an Ica to Go convenience store there, because the intention is that shoppers will enter the full store for that. Food-on-the-go can also be bought in the deli, bakery, or from the sushi concessionaire inside the store.

Maxi in Kungsbacka, as for most Maxi stores, has opted to start the shopper journey with non-food. Jendestig disclosed that this is to make sure shoppers see it and consider it before moving onto the food selection. He estimates that the store has cut its non-food assortment in half over the last five years, but the turnover has been maintained. The secret lies in identifying the categories that the core audience wants to find instore and then becoming the best in terms of price and quality. Cutting down on the number of articles and focussing on different seasonal ranges are other critical success factors, Jendestig said. 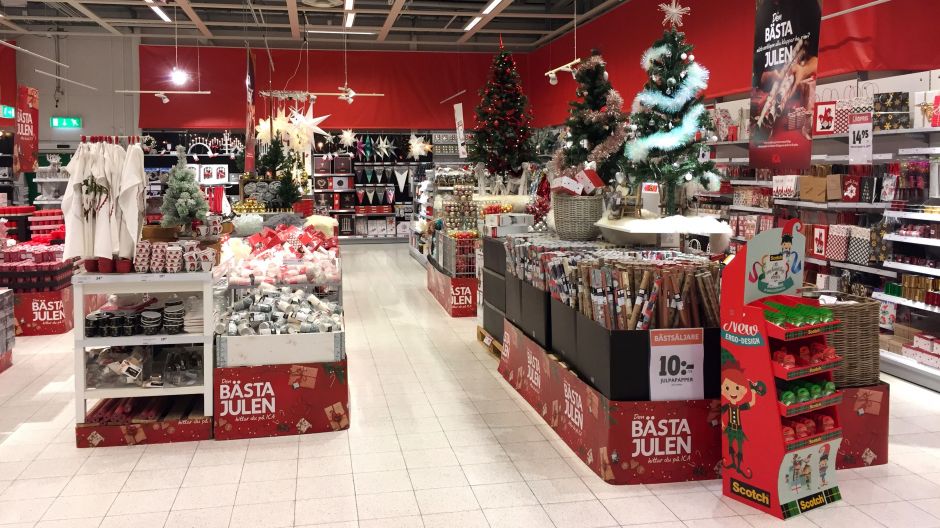 LZ Retailytics
The store assigns a significant amount of space to its seasonal non-food assortment.
Directly after the non-food, which covers some 38% of the sales space, the strategy is to bring the shopper to a halt at its brand new fresh grocery section. This is partly achieved by starting the section with some of the store’s best promotions, but also by building category specific “rooms”, visible upon entry. To facilitate this, around 500 sq m has been added to the section and a round deli placed in the middle rather than along the wall. All of the fresh categories have been made deeper, wider and have been assigned more floor space. The fruit & vegetables section consists largely of pallets, to put the focus on the products and provide a good value-for-money feel. This seems to work, since it generates the highest turnover of all categories in the store. 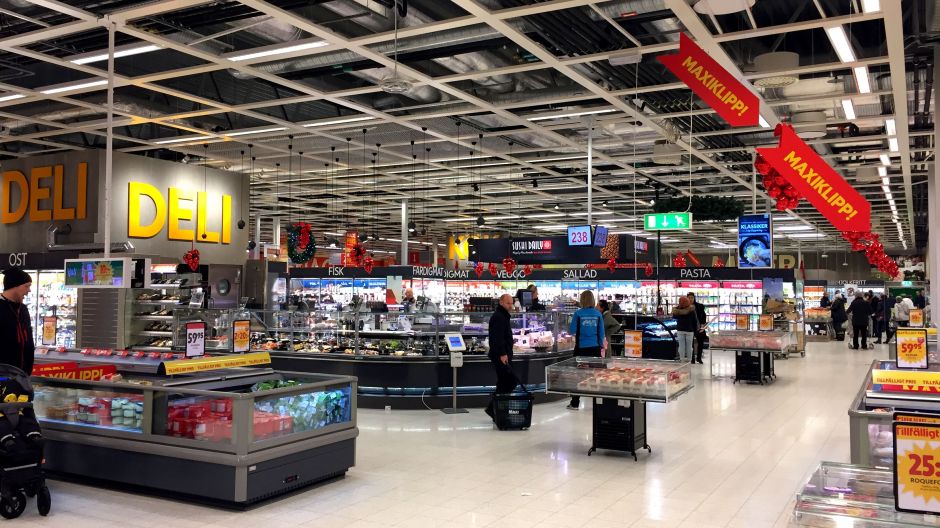 LZ Retailytics
The fresh section is designed so that shoppers can take their time browsing. This is important since sales of core protein products largely drive that of complementary groceries such as vegetables and carbohydrates.
The ambient food section consists of long wide aisles in order to not break up the categories and thereby cause confusion. At the checkout area, the store has placed its mobile scanning tills last and the traditional tills before that. The reason for this is that the former generates around 50% of the turnover because the average receipts from mobile scanning are double that of traditional checkouts. Jendestig therefore wants to make sure that the most profitable shoppers don’t miss the frozen goods and confectionery sections before checking out. 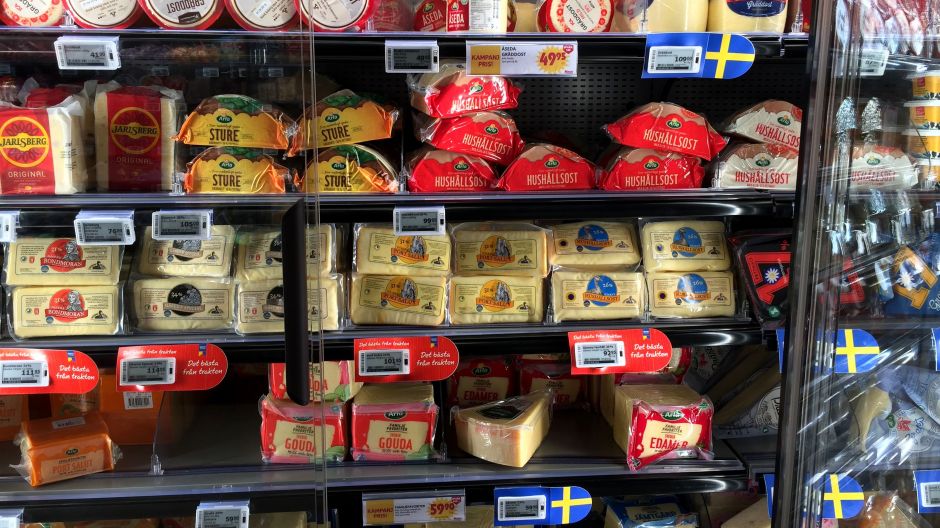 LZ Retailytics
Shelf talkers are used consistently throughout the store. They are used effectively to highlight attributes such as locally produced, domestic, organic, discounted items or products price matched to the local price leader, Willys.
Jendestig ranks customer service as the number one priority and differentiator for the store. Together with consultants from Stigfram, a plan was made to improve proactivity in terms of staff interaction with shoppers. This includes both leadership and proactivity training for all employees, as well as writing a handbook. The basic premise is that employees should approach shoppers and ask if they need help as soon as they suspect this might be the case; and actively provide them with information and inspiration. According to Jendestig, the initiative is a key contributor to achieving an 8% sales growth through the refurbishment period; and an impressive 14% growth directly after it.

Thinking One Step Ahead

Maxi in Kungsbacka stays true to the rational, efficient and commercial factors of a classic hypermarket, while putting customer service and fresh food in the forefront. Unlike other new hypermarkets we have visited in Sweden, the store starts with a dedicated non-food area (excluding flowers and health & beauty). This might not be the most convenient layout for food-only shoppers; and arguably, nor does it immediately send a clear message about freshness straight away. However, it does make it abundantly clear that Ica central, which is responsible for the non-food section in each Maxi hypermarket, believes in its non-food assortment. The seasonal section was also much larger than any other that we saw on our Sweden trip; and we find the retailer’s dedication and innovation inspiring. However, we also found the vastness of the non-food section somewhat overwhelming and the one-room per category approach which we’ve seen elsewhere is possibly preferable in that respect.

In the fresh section, on the other hand, navigation is simple; and we would say that the store has succeeded in its ambition to encourage the shopper to come to a halt here and browse through all of the sections. It is convenient for shoppers, but also likely to be sales-generating and efficient, for example with fridges being replenished from the back. Instead of having a long row of serviced counters, the retailer has a round one in the middle offering prepared food, cheese and charcuterie. Other fresh categories are self-serviced which aligns to the store’s service philosophy. The customer interaction is not intended to be limited to the serviced counters, but should also happen on the sales floor, store manager Jendestig told us. This makes sense, as service proactivity is an area with huge development potential to increase both sales and loyalty. Furthermore, it is a hard-to-copy differentiator that requires investment and commitment to realise – meaning that actively prioritising it could turn into a real USP for the store.

When it comes to attracting shoppers to the store, Maxi in Kungsbacka also has the answers: offering discounts for pensioners on Tuesdays and Wednesdays; a demo-kitchen; several local events each week; and a nationally planned event every two or three months. In addition, the pharmacy, café and postal services contribute to the sense that the store is a one-stop shopping destination. A drive pick-up point for online order collection is something we haven’t seen at any of Ica Gruppen’s competitors and is another important differentiator in terms of e-commerce. 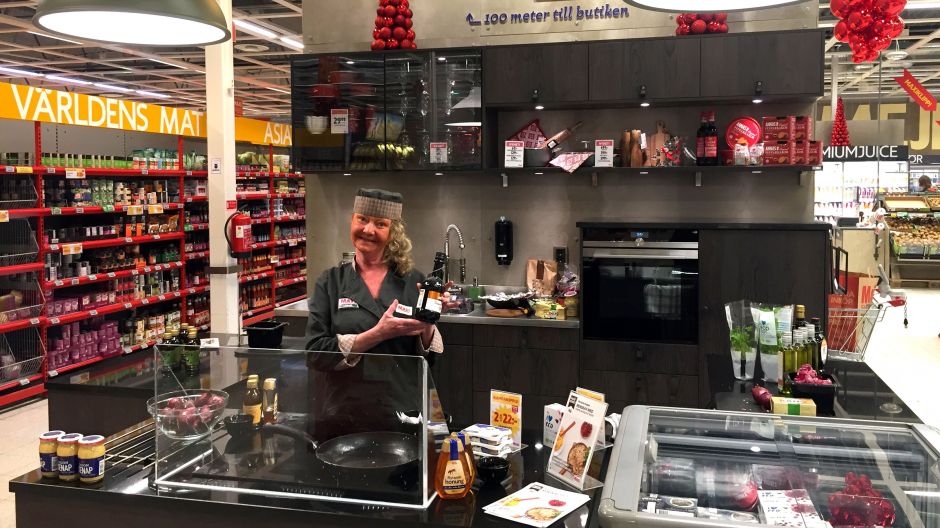 LZ Retailytics
Lisbeth prepares food in the store’s demonstration kitchen, Monday to Saturday 12-7pm
Overall, we think Maxi in Kungsbacka has been proactive with its revamp, catering for the changing demands of its target group, without compromising on its core concept, nor reducing its sales area. LZ Retailytics forecasts that the Maxi banner as a whole will continue to generate strong like-for-like growth, but with its total growth somewhat dented by its online sales, fewer store openings and decreased sales surface areas.

Read about the other stores we visited in Sweden:
Stora Coop in Kungsbacka
Lidl in Gothenburg
Netto in Kållered
City Gross in Kristianstad