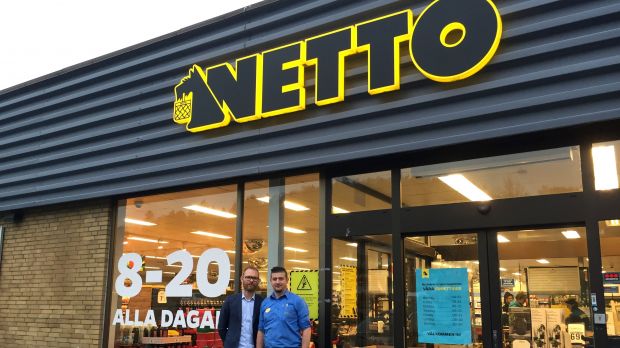 Photo: LZ Retailytics
Jeff Salter (left) and Senad Zuta (right) guided us through the store situated in a residential area in Kållered, close to Gothenburg. The sales area is 750 sq m and it stocks around 3,000 SKUs. The ambition is for brand new stores to have sales areas of 800-1,000 sq m.

LZ Retailytics was invited to see Dansk Supermarked’s new Netto soft discount concept in Sweden. We met up with Netto International Concept Director Jeff Salter and Store Manager Senad Zuta at a recently converted store in Kållered, outside Gothenburg. Salter told us he sees big potential for the discount format in Sweden and points to the dominance of the channel in the retailer’s home market of Denmark as well as in Norway. According to LZ Retailytics data, the discount channel has 35% market share in Denmark, 47% in Norway and only 5.5% in Sweden. However, Salter is also convinced the breakthrough will not happen by itself and retailers must convince the Swedes by giving them a store that they want to shop in. Netto has therefore based its new concept on three core demands it identified in surveys with Swedish shoppers: More fresh food, easier navigation and an improved atmosphere. This comes on top of Netto’s fundamental focus of offering low prices.

Converted Netto stores have experienced solid double-digit growth and are performing very well in the fresh food categories, Salter revealed. Increased basket sizes, stronger loyalty and higher footfall are all behind this development. The concept is to be rolled out to the entire store network with nine stores already converted and 20 more to be revamped in 2018. New stores will also follow the new concept and the opening guideline is 20-25 stores initially to build up the organization’s capability, with a ramped up opening rate of around 40 stores annually in 3-4 years’ time. In its other markets of Denmark, Poland and Germany Netto's store networks are also being updated, with some elements being implemented across many markets while others differ in line with local adaptation.

The new concept features secluded shelf sections that aim to provide a calm and convenient shopping experience. One such section, combining fruit & vegetables and bakery is the first thing shoppers come across upon entering the store. Here the expansion of the fresh assortment becomes obvious and two other new features are also showcased: the freshly baked bread section and a dedicated shelf for the new organic private label Go Eko. 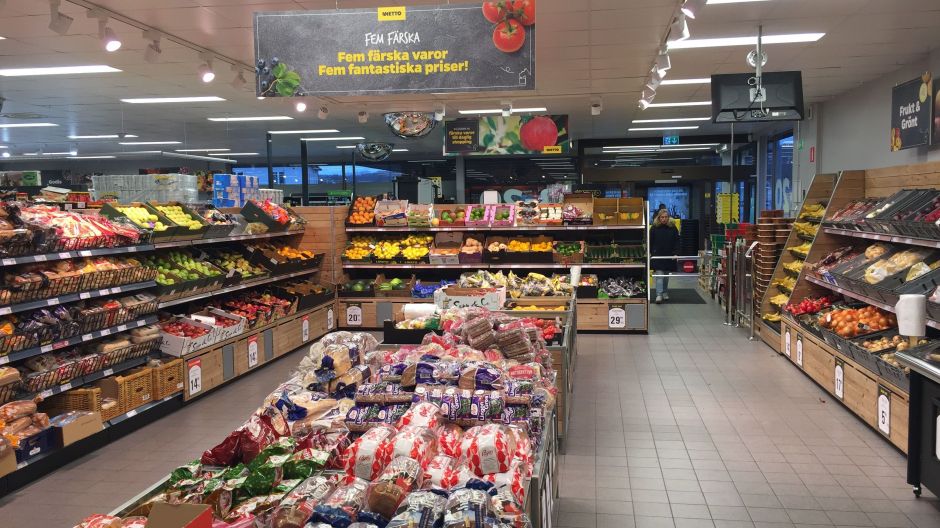 LZ Retailytics
The first secluded section co-merchandises bread as well as fruit & vegetables and gives shoppers time to browse and pick their items.
After leaving the first secluded section we step into a second one, centred around refrigerated fresh meat,  intended to give a quality impression with its black colour and product images. Through this the retailer wants to showcase its extended fresh meat category in its entirety. The new umbrella private label Premieur and category private label Köttmästaren are highlighted on the sides of the fridge. Alongside the meat are shelves with condiments and other ambient side products that allow shoppers to plan their entire meals on the spot. 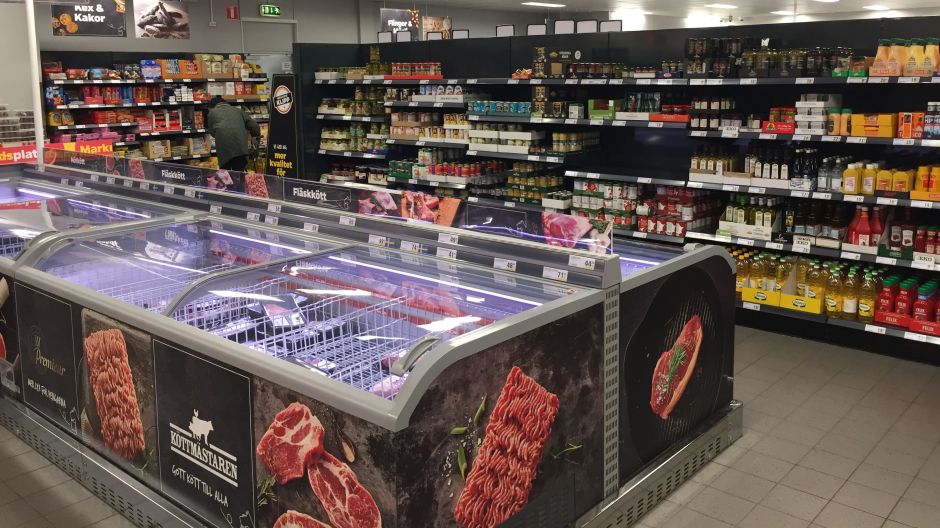 LZ Retailytics
Meals can be planned on the spot, as common condiments and complimentary ambient products are co-merchandised in the same secluded section alongside refrigerated meat.
After these two sections, we enter the wider store area, resembling the typical discounter aisle design. Freezers line the floor and chilled products are placed along the walls. Marknadsplatsen (The market place) is the name of Netto’s temporary assortment comprising around 1,000 SKUs. New products are added every week on a WIGIG (when it's gone it's gone) basis. They can be found within the categories of ambient, chilled, frozen and non-food. In the new concept, these offers are clearly highlighted at the ends of the freezers and in dedicated refrigerators highlighted by shelf talkers, to avoid confusion. The bulk of Marknadsplatsen consists of ambient and non-food products all found in the same section, located after the chilled and frozen food. This has been considerably reduced to give more space for the expanded fresh categories. 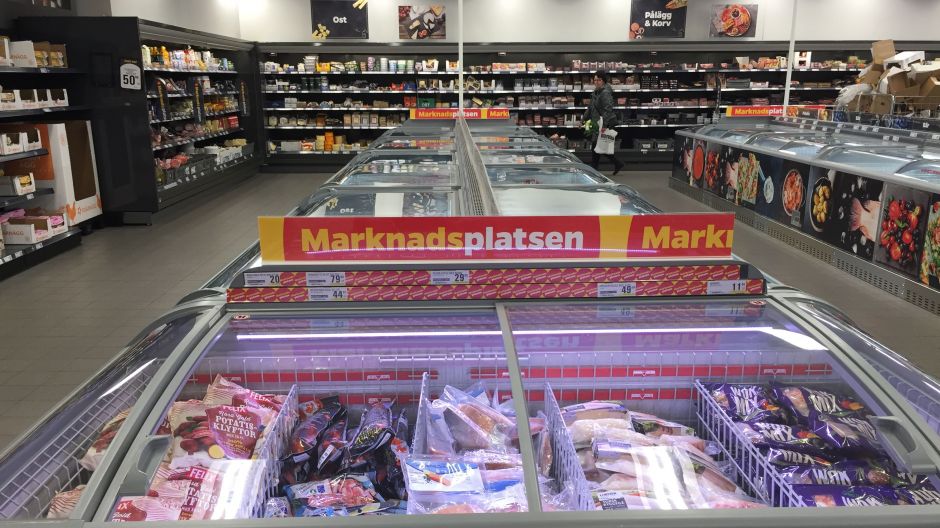 LZ Retailytics
For frozen food, the temporary offer is clearly highlighted on the gondola ends. For chilled food the temporary nature is signalled by shelf talkers. It could help further if additional overhead signage was used, in our opinion.
A vital part of the concept aims to improve the overall store atmosphere. Instead of the usual Netto yellow, a dark grey colour is used for signage and equipment and inspirational images are shown above each category. Shelves have been made lower for a better product overview and these now replace most of the pallets. Even if Netto has the ambition to increase and refresh its private label proposition, low-priced A-brands remain an important and differentiating factor of the concept. Salter said the goal is to provide a one-stop shopping proposition that reaches new, younger and more affluent target groups while maintaining its loyal shopper base. The upgraded stores themselves are to be the main communication channel to achieve this. 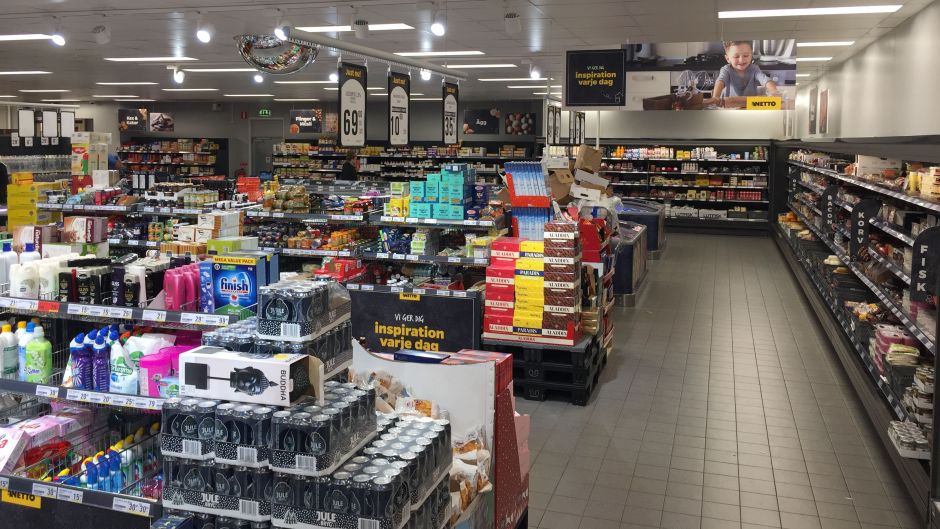 LZ Retailytics
The new concept gives a much more orderly impression with its wide aisles and clear signage. Even so, the varying nature of the temporary promotions still gives a somewhat impromptu feel.

The issues that Netto has addressed with its new concept are precisely those that we feel might have previously discouraged many Swedish shoppers. The Swedish market has been somewhat neglected by Dansk Supermarked in the past and many of the stores are dated and inconsistent. A clear and consistent shopping experience with a more complete assortment is likely to boost the sales density of the store network and enable further expansion. Netto brings something unique to the market with its proximity locations, cheap A-brands and treasure hunting experience, it’s just been a matter of presenting it in a nicer wrapping. 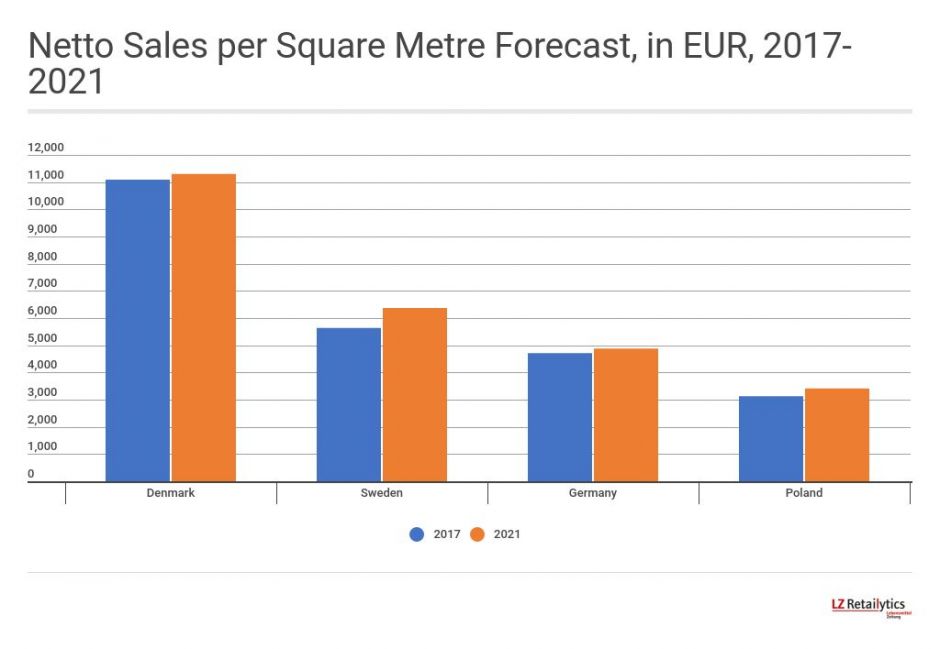 LZ Retailytics
Netto has almost double the sales density in its home market of Denmark as it does in Sweden, LZ Retailytics data shows. We forecast the store conversions to contribute to the retailer’s Swedish stores displaying a higher sales per square metre growth rate than all the banner’s other markets 2017-2021.
The secluded initial sections and low shelves instead of the usual pallets resembles what Swedes are more used to from their supermarkets. Even if sacrificing some efficiency this heightens both the shopping experience and overall convenience. Reducing the temporary assortment to free up more space for fresh, frozen and chilled food is another compromise by the retailer which we think may pay off by increasing customer satisfaction. In the future word-of-mouth could increasingly take over the role that these had of attracting new shoppers. Overall, the Kållered store also gives a much more orderly impression than non-converted Netto stores we have visited in the past and it was a pleasant store to spend time in. 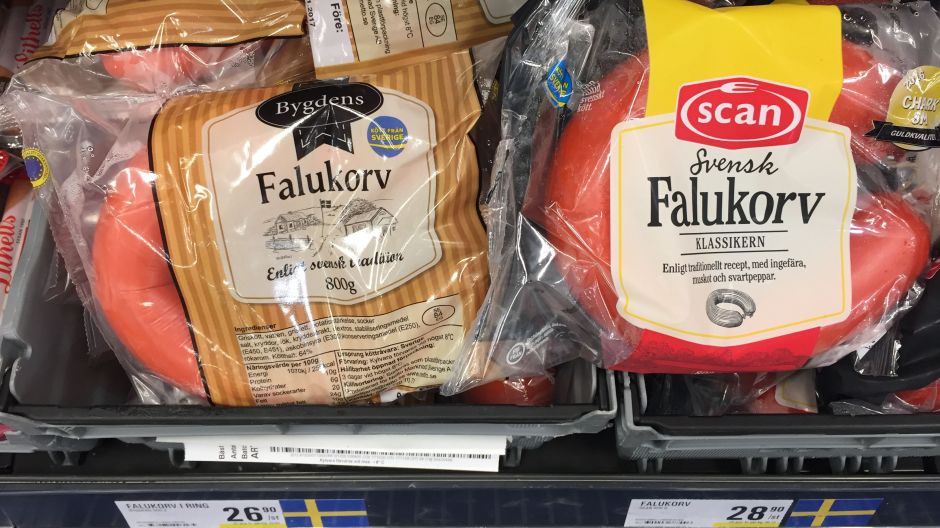 LZ Retailytics
Stocking most of the major brands in most categories will likely help Netto gaining acceptance as a one-stop shopping destination. To accommodate this, it often merchandises its own label and the A-brand equivalent next to each other.
Although we think the new concept will help Netto in its ambition of increasing shopper loyalty, the retailer will likely still have to accept playing second fiddle to a full-assortment retailer in many cases. Stocking 1,000 WIGIG SKUs on top of the 2,000 items in the regular assortment gives a unique shopping experience but it is also unreliable for the typical Swedish bulk shopper. We therefore think the retailer should embrace its proximity advantage even more by for example listing more convenience meals. This is also on the agenda, Salter disclosed. Organic and free-from food are other areas which were nice to see in dedicated sections but where we believe there is room for further improvement. 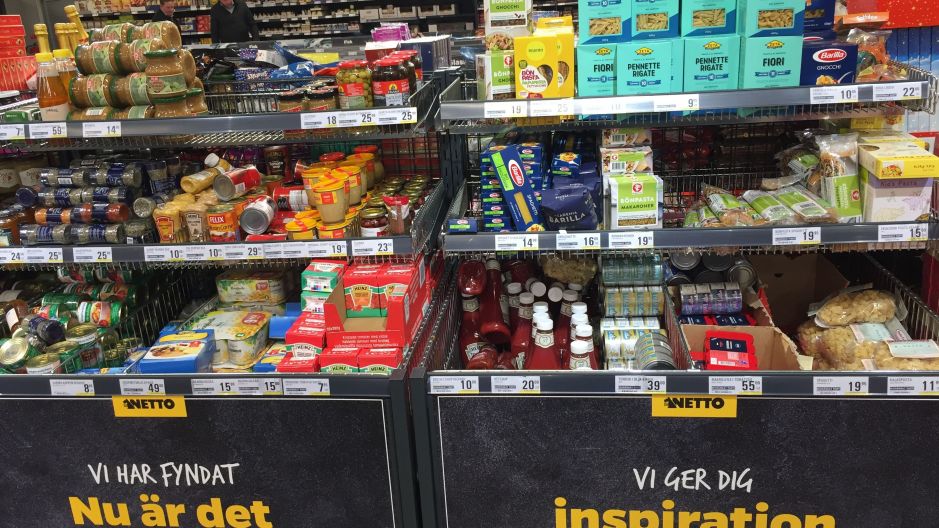 LZ Retailytics
On Marknadsplatsen varying temporary offers within several categories can be found. These are advertised in the retailer’s flyers but for a bulk shopper, expecting to find a certain item it could pose a problem.
With Salling Fondene now being the sole owner of Dansk Supermarked and with Netto Sweden getting a new experienced CEO in February this year, we think the retailer is well equipped to reach its expansion targets. However, as LZ Retailytics data shows, Netto’s Swedish store expansion has been slow in recent years and going from a couple of new stores annually to 20-25 and then 40 will be a challenge. With the top three grocers claiming 72% of the market, by LZ Retailytics’ definitions, it’s no easy task to expand in the country. Netto will have to go head to head against these competitors in many cases, but its new concept leaves it better prepared for such a fight. However, we feel a faster conversion rate than the 20 planned revamps this year would help the retailer to more rapidly improve its brand awareness in the country, especially with Lidl being well underway in the roll-out of its own new take on discount for Swedes.

Read about the other stores we visited in Sweden:
Stora Coop in Kungsbacka
Lidl in Gothenburg
Maxi Ica Stormarknad in Kungsbacka
City Gross in Kristianstad
Topics: Dansk Supermarked