Swiss retailer Migros is reportedly planning to divest of its office supplies division Office World, according to Swiss magazine Handelszeitung. The plan would be to sell not only its around 25 stores but also the delivery service. In 2016, Office World had a net turnover of CHF179 mn (EUR164 mn), declining by 0.6% compared to 2015.

This will not be the only recent change in Migros' retail division. Since taking the position of Head of Retail less than ten months ago, Beat Zahnd has already sold the online bike shop Probikeshop and discontinued apparel brands Schild and Herren Globus to convert the stores to the Globus department store brand.

Migros has a very diversified banner portfolio which is also the case for its main Swiss competitor Coop. Migros’ extensive variety of banners ranges from grocery and apparel to furniture and electronics stores. Now it seems that this may have proven too difficult to manage over time. When looking at some of Europe's other largest retailers, none of them seem to operate in as many channels as Migros. Europe’s number one, Schwarz Group, operates discounters and hypermarkets. Aldi, which is forecasted to become the second largest European player in 2020 according to LZ Retailytics data, only runs discount stores.

We have seen more and more retailers divesting their non-core, non-grocery channels. For instance, French Auchan divested its furniture stores while Finnish Kesko sold its department and electronics stores in 2015 and now also its furniture business. Those leading retailers that still provide a diverse banner portfolio mostly focus on a mix of grocery channels, which of course gives them more opportunities to leverage synergies. 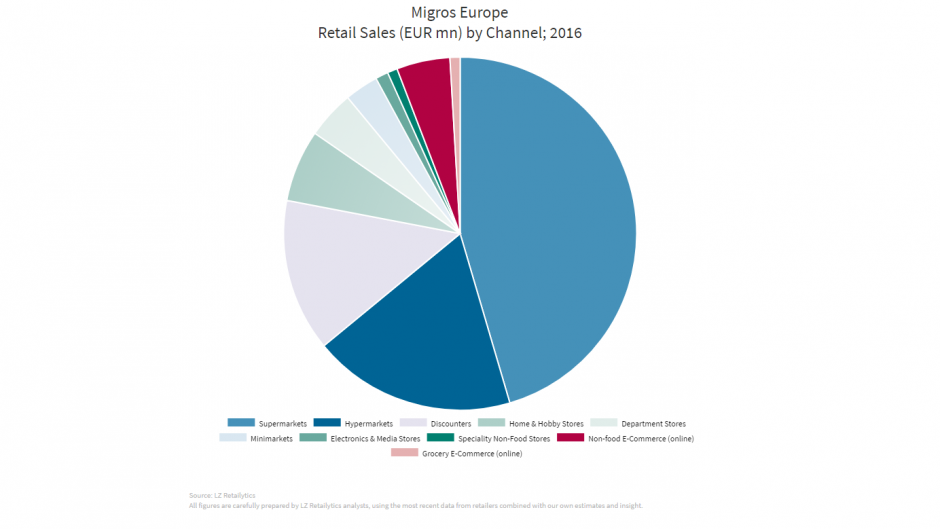 The fact that the leading players tend to focus on their key competence, grocery retail, indicates that this is a winning strategy. By investing solely in strengthening this area, expertise can grow. And of course, it also makes sense to get rid of loss-making secondary ventures. When looking at the figures from 2016, it seems that Migros’ non-food banners are holding back the company’s performance. To name one, turnover for Migros’ department and apparel store banner Magazine Zum Globus fell by 7% over three years to CHF960 mn (EUR881 mn), according to LZ Retailytics. One reason for the challenges in non-food could be the shift from offline to online for many items. For the remaining non-food banners, the retailer has to decide whether it wants to strengthen its online shops or to also divest of these businesses over the time.

The situation could be improved by an omnichannel approach and by leveraging cross-channel synergies. However, we strongly believe that putting its focus onto core grocery banners would be even more advantageous for Migros. In this field, the well-established retailer can count on its almost unparalleled experience as one of the leading Swiss manufacturers and retailers – and as we all know, everyone has to eat. The perception of Migros being a food specialist, founded in 1925, should be enforced. It is better to focus on core competencies than to get lost in too many areas.

Migros is already approaching the right track, not only with the latest divestments but also with the roll out of its PickMup click & collect offering. Migros is aware of the potential of and demand for affordable grocery e-commerce solutions. The fact that competitor Coop already operates many pick-up points for its grocery online shop Coop@home is also likely to be part of the motivation behind this move. This becomes even more striking when taking a look at sales performance. According to LZ Retailytics data, Migros currently generates 45% more turnover with its grocery e-commerce operation than Coop. However, this gap will be reduced to 35% by 2022. We wonder if Coop also has to face the challenge with its non-food offering. Even though non-food operations such as its furniture banner Toptip/Lumimart are showing sales declines, its online shops for these banners show significant sales growth of more than 10%. Coop’s way of focusing on expanding the online expertise for the specialist formats is a good one but time will tell if this will be as successful in the long run as concentrating on core competencies as Migros is now beginning to do.